"I am honored to continue Pahlmeyer’s legacy of iconic wines and be a steward to our exceptional estate vineyards.”
– Cleo Pahlmeyer

Daughter of Jayson Pahlmeyer, Cleo grew up with the family business but never visualized herself actually joining the winery. Her education took her to the East Coast where she received her BA in Art History from the University of Virginia and went on to earn a Master’s Degree in Connoisseurship of Fine and Decorative Art at Sotheby’s Institute of Art in London. After landing a job at Bonhams auction house in London, she discovered that it was not only the art auctions that interested her, but the wine auctions as well. “Seeing our wine in London auctions, I realized for the first time what a respected name Pahlmeyer is in the wine world,” she admits. “It was an awakening for me and I began to consider how I could help propel the company my father had built.”

With Napa’s exceptional cuisine and world-class wines in her DNA, Cleo comes by her love of wine and the wine industry naturally. In 2008 Cleo joined the family business in sales and customer service, and with characteristic Pahlmeyer exuberance infused the winery with new energy. She moved on to manage direct to consumer sales and marketing, and later directed the company’s communications and public relations. Cleo was instrumental in the development and launch in 2014 of the Wayfarer Pinot Noirs and Chardonnay from their estate vineyard in the Fort Ross-Seaview appellation, planted in 2000. In 2017, Cleo was appointed President.

“My father’s vision and passion have driven our success for more than thirty years,” said Cleo Pahlmeyer. “With the support of an incredibly talented and dedicated team, I am honored to continue Pahlmeyer’s legacy of iconic wines and be a steward to our exceptional estate vineyards.”

A mother of two, Cleo is devoted to her family.  And when she has time, she is also an avid cook.  Cleo and her husband Jamie Watson love to entertain friends and family and spread the Pahlmeyer story all over the world. “I meet people everywhere who share wonderful experiences they have had with our wines, and often hilarious stories about my dad,” she says. “It has been an incredible journey so far but what really excites me is the future of Pahlmeyer." 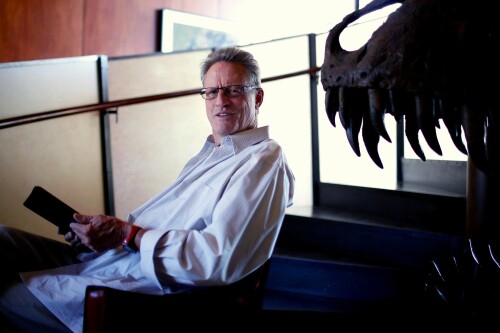 "When our first wine was finally blended, I thought I'd died and gone to heaven."
– Jayson Pahlmeyer

Raised in what he calls the “grimy industrial city of Oakland - home of the Hells Angels, the Black Panthers and the law office of Haas & Pahlmeyer,” Jayson Pahlmeyer’s earliest dream was to become a lawyer. “I loved everything about it,” he says. With an advanced law degree (LLM) from George Washington University, Jayson focused on trial law – fitting for a larger-than-life man who thrives in the spotlight.

His fascination with wine began in 1963. “I was completely enthralled by the idea that you could take a grape and create these unbelievable colors, aromas, flavors.  And the differences from vintage to vintage – amazing!”

“There were very few California wines available, but I managed to get a Beaulieu Vineyards Pinot Noir to compare to another Pinot Noir in a blind tasting. I was very methodical. Once I determined that I preferred one over the other, I got another bottle of the winning wine and a different bottle to compare to it, and kept on going. I knew what I loved."

Jayson started a wine tasting club at law school and kept meticulous tasting notes in binders including where he was when he conducted the tasting, the date, whom he was with and predictions of when the wine would peak. “I’m sure I hit that 10,000 hour rule Malcolm Gladwell says makes a master. In a blind tasting, if I’d had the wine before, I could tell you exactly what wine and vintage it was.”

He kept tabs on everything happening in Northern California wine and bought 12 cases of magnums of Robert Mondavi’s inaugural wine – 1966 Cabernet Sauvignon. (When Mondavi launched Opus One with Baron Philippe Rothschild, he came to Jayson for reserves of the ’66 Cab.)

“My epiphany moment was in 1980. It was a 1952 Cheval Blanc in a big Riedel glass. The aroma alone was unbelievable – you didn't even need to drink it, it had such depth of character.” It wasn’t a Cabernet Sauvignon, a Merlot or a Cabernet Franc, he asserts. “It was the synergistic effect of the classic Bordeaux varietals. That stayed with me. And years later, that's how I knew what to plant in the vineyard.”

Obsessed, Jayson studied every book about wine he could find – from French and Australian to German and South African wines – and never took a single class. Between voracious reading, methodical tasting and a heap of passion, he was able to harvest his first vintage in 1986 and put his label on it just a few years later. “When our first wine was finally blended, I thought I'd died and gone to heaven,” he says.

Read more about the inception of Pahlmeyer Winery – the story of Jayson’s partnership with vineyard owner John Caldwell and their pursuit of the finest Bordeaux clones...

Today Jayson remains the winery’s visionary, yet sees in his daughter, sons and son-in-law, the same devotion and passion to wine that compelled him to start Pahlmeyer. “One of my proudest moments as a vintner and father was when, after 2 years working at the winery, my very talented daughter Cleo came to me and said, ‘Dad, when it comes to the future of Pahlmeyer, I am all in!’”

Winemaker Jennifer Williams brings a distinguished record of experience to her new role at Pahlmeyer. She has led winemaking at Arrow & Branch in Napa’s Coombsville region, and at Spottswoode in Saint Helena, where she was originally drawn to the Novak family’s commitment to organic viticultural practices. Jennifer made wine at Spottswoode from 2002 to 2011, and in 2007, she was named a “Winemaker to Watch” by the San Francisco Chronicle.

As a child, Jennifer developed an early passion for agriculture at her parents’ ranch in Valley Center outside San Diego. In the family’s apple orchards she began to pay attention to the way farming practices influenced a fruit’s flavor, texture and acidity. When it came time for college, she pursued a degree in agriculture at California Polytechnic University, San Luis Obispo, took an internship at Beaulieu Vineyards, and fell in love with Napa Valley and the wine industry.

Jennifer has rounded out a diverse career by pursuing opportunities in vineyards and wineries throughout California’s Central Coast and in the Rioja Alavesa region of Spain. She has worked closely with such luminaries as Francoise Peschon, Rosemary Cakebread, and David Abreu.

In 2005, Jennifer and her husband, Mark, launched Zeitgeist Cellars, a small label with a focus on Cabernet Sauvignon and historic white varietals like Trousseau Gris and Chenin Blanc. The couple has three young daughters.

By entering the Pahlmeyer website, you affirm that you are of legal drinking age in the country where this site is being accessed.