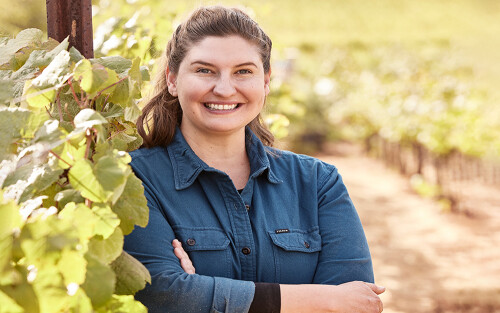 Pahlmeyer Winemaker Katie Vogt carries on Pahlmeyer’s pedigree with expertise, artistry, and keen understanding. Building on the eminence Pahlmeyer has earned over three decades, Katie approaches each new vintage as an opportunity to honor the extraordinary success of her predecessors while continuously raising the
bar.

“I’m not making individual wines, I’m continuing a legacy,” Katie says of the winery she joined in 2019. “Pahlmeyer wines demand attention. They are truly inspired, showcasing the consideration and thought behind every choice and every detail. We farm deliberately at Pahlmeyer — we’re taking vineyards to the edge and exploring the tension. When you’re making this caliber of wines, you are fiercely selective. The fruit that becomes Pahlmeyer is nothing short of phenomenal, with incredible balance, intensity, and power.”

A graduate of Cal Poly, San Luis Obispo, where she earned a degree in Agribusiness with a minor in Viticulture and Enology, Katie began her career in 2008, mentored by maverick winemaker Christian Tietje at his Four Vines and Cypher Winery projects in Paso Robles. Rising from intern to assistant winemaker, she delved deep into every aspect of winemaking, from vineyard sampling to managing the cellar to leading blending trials. “In Paso, working with Rhône varieties, blending is their essence and core,” she says. “I was very lucky to be part of that very early on in my career. I get a lot of joy out of blending, of tasting a lineup of wines and envisioning what it would look like putting them together.” Katie describes her winemaking style as having steadfast focus. She brings the precision and thoughtfulness of a master blender, constantly evaluating which vineyards and blocks will deliver the intensity and power to earn their way into the Pahlmeyer portfolio.

In 2014, she joined the Central Coast winemaking team at E. & J. Gallo Winery, working at Edna Valley Vineyard and Bridlewood Estate Winery. There was little room for error or second-guessing with large portfolios and significant investments at stake. She learned quickly to trust her talent, instincts, and technique. In turn, she quickly earned the esteem of her winemaking peers. A year later, Katie joined Napa’s historic Louis M. Martini Winery as Associate Winemaker, crafting small-lot and single-vineyard Cabernet Sauvignon in the winery’s Cellar No. 254. “In Napa, you’re focusing on the long term,” she says. “To succeed, you learn the nuances and appreciate the personalities of the sites. We commit to a clear vision, then we are relentless in bringing that to life".

"When our first wine was finally blended, I thought I'd died and gone to heaven."
– Jayson Pahlmeyer

Raised in what he calls the “grimy industrial city of Oakland - home of the Hells Angels, the Black Panthers and the law office of Haas & Pahlmeyer,” Jayson Pahlmeyer’s earliest dream was to become a lawyer. “I loved everything about it,” he says. With an advanced law degree (LLM) from George Washington University, Jayson focused on trial law – fitting for a larger-than-life man who thrives in the spotlight.

His fascination with wine began in 1963. “I was completely enthralled by the idea that you could take a grape and create these unbelievable colors, aromas, flavors.  And the differences from vintage to vintage – amazing!”

“There were very few California wines available, but I managed to get a Beaulieu Vineyards Pinot Noir to compare to another Pinot Noir in a blind tasting. I was very methodical. Once I determined that I preferred one over the other, I got another bottle of the winning wine and a different bottle to compare to it, and kept on going. I knew what I loved."

Jayson started a wine tasting club at law school and kept meticulous tasting notes in binders including where he was when he conducted the tasting, the date, whom he was with and predictions of when the wine would peak. “I’m sure I hit that 10,000 hour rule Malcolm Gladwell says makes a master. In a blind tasting, if I’d had the wine before, I could tell you exactly what wine and vintage it was.”

He kept tabs on everything happening in Northern California wine and bought 12 cases of magnums of Robert Mondavi’s inaugural wine – 1966 Cabernet Sauvignon. (When Mondavi launched Opus One with Baron Philippe Rothschild, he came to Jayson for reserves of the ’66 Cab.)

“My epiphany moment was in 1980. It was a 1952 Cheval Blanc in a big Riedel glass. The aroma alone was unbelievable – you didn't even need to drink it, it had such depth of character.” It wasn’t a Cabernet Sauvignon, a Merlot or a Cabernet Franc, he asserts. “It was the synergistic effect of the classic Bordeaux varietals. That stayed with me. And years later, that's how I knew what to plant in the vineyard.”

Obsessed, Jayson studied every book about wine he could find – from French and Australian to German and South African wines – and never took a single class. Between voracious reading, methodical tasting and a heap of passion, he was able to harvest his first vintage in 1986 and put his label on it just a few years later. “When our first wine was finally blended, I thought I'd died and gone to heaven,” he says.

Read more about the inception of Pahlmeyer Winery – the story of Jayson’s partnership with vineyard owner John Caldwell and their pursuit of the finest Bordeaux clones...

Today Jayson remains the winery’s visionary, yet sees in his daughter, sons and son-in-law, the same devotion and passion to wine that compelled him to start Pahlmeyer. “One of my proudest moments as a vintner and father was when, after 2 years working at the winery, my very talented daughter Cleo came to me and said, ‘Dad, when it comes to the future of Pahlmeyer, I am all in!’”

By entering the Pahlmeyer website, you affirm that you are of legal drinking age in the country where this site is being accessed.